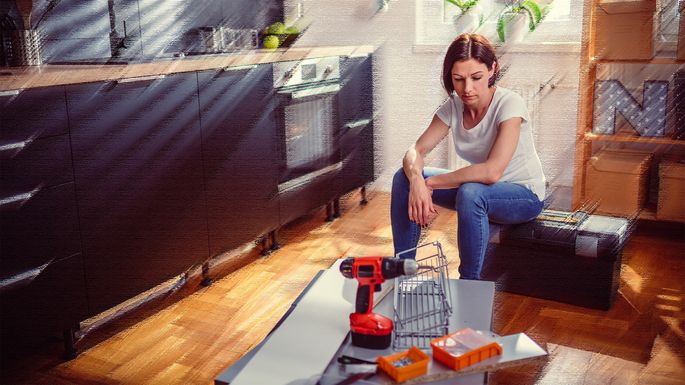 Binge-watching HGTV home improvement shows can make it look so easy—even enjoyable—to do anything from retiling a bathroom to repainting the living room. Heck, it even seems like it might make financial sense to forgo the pricy professionals altogether. What could go wrong?

Those famous last words have led nearly two-thirds of do-it-yourselfers to regret not calling an expert on at least one home improvement project, according to a recent survey from ImproveNet. The online home services marketplace surveyed 2,000 Americans in November who had attempted at least one DIY renovation project.

The average DIY enthusiast attempted eight projects, according to the survey. And about a third of them had to later hire a professional to redo the job—which can cost more than if they’d hired a professional from the start.

“People should educate themselves about what they’re getting into and what the common pitfalls are,” says Andy Kerns, creative director at Digital Third Coast, which teamed up with ImproveNet to do the survey. “It’s natural for people to expect things to go smoothly, especially if they’re not experienced contractors. [But] rather than just jumping in, people should find out what’s happened when things didn’t go well for others.”

Folks with no experience can start with a simple, low-stakes project, and go from there, says Joanne Theunissen, the remodeling chair of the National Association of Home Builders.

“We have seen people take on a lot more than they could deal with,” says Theunissen, also the co-owner of Howling Hammer Builders, a Mount Pleasant, MI–based remodeler and custom builder. “Be cautious. If it looks easy on TV, understand it’s not [in real life].”

Which projects did folks regret doing themselves the most?

If you don’t have experience installing floor tiles, you may want to start slow, rather than in the master bath: That was ranked the most regretted home improvement project by survey participants.

“It’s so difficult, and there are so many steps to getting it right,” says Theunissen. “If you think you want to try, buy an old table and see if you can put ceramic tile on the top, getting it level and grouted correctly. And if doesn’t work, throw it away. You’re not out much.”

Why were these DIY projects so regrettable?

The majority of DIYers, 55%, said their projects took longer to complete than they expected. The ones that ran over more than anticipated the most were repairing home foundations, installing outdoor patios and walkways, and painting the exteriors of their homes.

Meanwhile, about 50% of do-it-yourselfers said their improvements were physically more difficult than anticipated, particularly when it came to installing roofs, landscaping, or installing patios and walkways. And 48% said their endeavors were technically harder than they had counted on, and 17% said they cost more than they had assumed.

“A lot of people do very nice work, but you have to be really aware of what your skills are,” says Theunissen.

So what was the top reason folks were disappointed in the fruits of their blood, sweat, and now tears? About 55% of respondents said the finished project simply didn’t look as good as they had hoped. These folks were the most dissatisfied with their interior paint jobs, floor tile installations, and hardwood floor installations.

Michelle Kightly has been in the real estate industry for over 29 years and a broker for more than 25 years. The previous company that she was a founder of and broker for was rated one of the top leading mortgage brokerages at that time. Michelle Kightly started Trinity Real Estate Services and Trinity Mortgage with the vision of having a professional team of real estate agents and loan officers that truly had a heart for the homeowner! With a foundation built on integrity, honesty, and customer service, her hopes and continual goal is that Trinity will always be a name that homeowners can Trust!
View all posts by Trinity Real Estate Services →
This entry was posted in Uncategorized. Bookmark the permalink.